From the Heart: Poems of Love and Loss 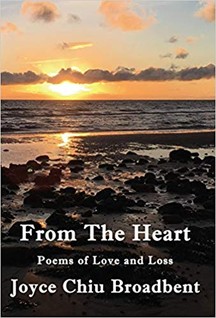 
Joyce Chiu Broadbent, MBACP (accredited) psychotherapist and mindfulness teacher has published "From the Heart: Poems of Love and Loss".

Her personal essay:
I majored in psychology and sociology (1974 – 77) and had a successful career in market research. In 1985, I fell in love with Mike, an HSBC client, and we married in 1990. Nothing perfect lasts forever. In the throes of a midlife crisis, I began a spiritual quest to discover who I was behind my different roles and in 1997, I left alone for London to train as a psychotherapist and mindfulness teacher. A year later, Mike joined me. By 2001, life seemed complete and Mike and I had found our place in the world.

The year was 2004. The neurologist just dropped a bombshell. Mike has Parkinson’s Disease and had to take early retirement. By 2015, things started to unravel and I found juggling my work life and caring for my ailing husband daunting. To some extent, my training served me well and I started to find solace in meditation and renewed my love for poetry. Initially, I was able to hold the present with some degree of equanimity, to notice all the chaos erupting before me that compelled me to write what I felt.

By nature a sensitive and introvert honed to adapt to my work and social life, I found it increasingly unbearable to witness my strong, independent husband being struck down by this cruel disease. All I could do was to retreat into myself and allowed my heart to articulate my pain. Sometimes, I did not even know what I felt and when the words wrote themselves, they revealed to me what was below the surface. Writing poems became my therapy.

After being woken up one night by Mike’s groan from a nightmare, I wrote this poem suffused with love and despair. Reading my poem back gave me the impetus to endure. For another night, another day.

In bed I lie awake, alert
To your laboured breathing,
To any slight movement,
To the switching on and off of lights.
Are you caught in a nightmare
Or lying awake,
Frozen and cramped
Or shaking, unable to stop?
What dreams do you chase tonight?
Or are dreams chasing you?
Clutching at the edge of a precipice,
Frozen, mid-air?
I hear a cough, a groan,
Shall I come to you,
Hold you in my arms,
Willing you to sleep with the words:
Dream of me?

I never want my poems to sink into self-pity. For me, they are the cleansing of my inner world and a way to reach out to others in a similar position: that we are all in the same currents.